This evening I am happier than a bird with a french fry. I’ve just learned something awesome. Okay, it’s more than awesome. It’s SUPER FREAKING awesome. SweetWater beers are about to be distributed in Ireland. If you ain’t excited, I’m about to tell you why the hell you should be!

Everyone and their cat knows I’m a craft beer freak. While my day job (which I don’t consider a job because of how much I love it) pays the bills & occupys a ton of my time, thoughts & energy, beer is something that makes me giddy excited. Sweet Water Brewing from Atlanta GA are a company I stumbled across thanks to one bald headed, tough S.O.B. called Steve Austin. Yes, THAT Steve Austin. Stone Cold himself who kept talking about Sweet Water IPA on his podcast.

So, last time I was in the U.S., I tried not only their IPA, but their 420 Extra Pale Ale. And honestly, I was hooked like a damn addict. Their Extra Pale Ale utterly sold me. I mean; COMPLETELY SOLD ME. And when I’m stateside & come home, I’m damned sad because alot of beer I try I know more often than not I’ll never get to have until I get back there.

Then, I spot a wee post in my facebook feed (thank you Janice Dunne of Irish Beer Snob Podcast fame & glory): 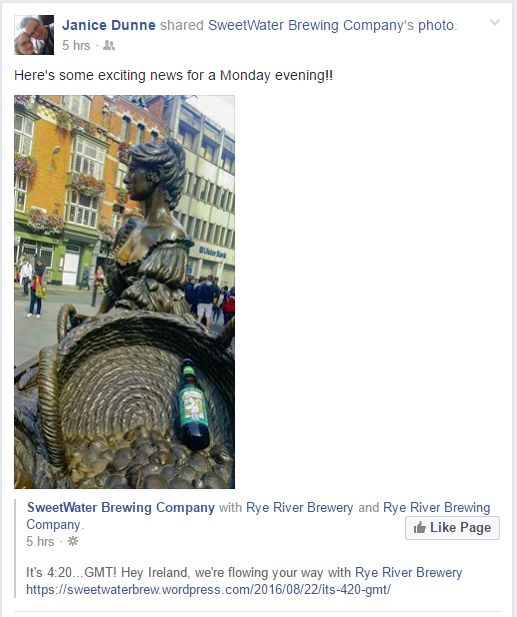 I kid you not – I leapt up & wooped like a thoroughbred, grade A, sillyassed idiot for around 5 minutes; fist pumping & all. Then, I checked out the blog post from SweetWater.

My good buddies over at Rye River Brewing are now the exclusive distributor of SweetWater Brewing’s beer in Ireland, & there’s some inbound to be stocked nationwide according to them, & to one Simon Says (aka Simon Broderick – who would be in the know having recently joined Rye River — massive congrats, you lucky, lucky S.O.B. …. I’m insanely jealous & super delighted for you brother!)

I am super hyped to once again get my hands on their 420 Extra Pale Ale, which is a big bastard Chinook & Cascade monster that I’ve deemed to be Sierra Nevada Torpedoos little brother from another mother (which WILL be a staple in my fridge, as Torpedo is)

Their IPA is a piney, citrus MONSTER than will blow your freaking mind. At 6.3% ABV it’s no lightweight, but then again I drink Rye River’s Francis IPA on such a regular basis, I should at this point just buy a freaking stake in the brewery & be done with it (FYI: it’s my favorite IPA I’ve ever had. Period. And no, that’s not brown nosing – it ticks every single god damned box of my likes in a regular-always-available IPA).

So, when these land. Clear plenty of space in that beer fridge, & stock up on 420 Extra Pale. It is the PERFECT anytime beer to fill in between those other ‘quick-stop-off-to-see-what’s-new-beer-buying-sprees-that-result-in-spending-a-ton’ (these are unavoidable. Honestly). And try their Brown Ale. We need more Brown Ales in Ireland.

Head on over to Rye River’s special sub-site, http://www.ryeriverbrewingco.com/sweetwater to find out more. They’re available from next week!