My love of BrewDog is not a secret. However, it has been quite some time since I bought a beer from their core range, which I find myself buying less of due to my preference for alternatives from other breweries here in Ireland, which I’ve covered recently. However, one aspect I’ve not talked about is my growing love for Pale Ales again. No, it’s not because I don’t want something hoppy or aggressive in its bitter profile. No, it has nothing to do with wanting a lower ABV beer. It’s just we’ve a great selection of Pale Ales now available regularily in Ireland. And yet, one Pale Ale still rules them all for me. BrewDog Dead Pony Club.

3.8% ABV. Some would call that ‘dishwater strength’. Some would view that ABV as the equivalent of trying to paint on a canvas the size of a postage stamp. And that’s just not possible. I would see both ends of the argument here as idiotic. Allow me to destroy this viewpoint in one image. 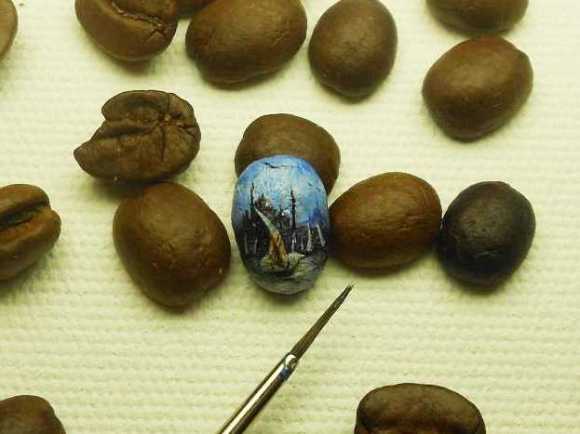 Achieving this is about skill, patience & a willingness to push the boundaries in the process. The above image was painted on a coffee bean by Turkish artist, Hasan Kale, who is known for his micro paintings. Brewing a beer with the levels of flavour that exist in Dead Pony Club is an incredible feat of technical brewing prowess. Anyone can brew a high strength beer, as there’s plenty of places to hide in the canvas the malts provide towards the ABV. In 3.8%, there is almost nowhere to hide your mistakes, off flavours or undershooting on your hops.

Without being a dick & naming names, there are 4% ABV pale ales produced in Ireland that just do not even stand close to the sheer amount of flavour in this beer. Same with some IPA’s produced here with 5% upwards. And this is where a key point to artisan produced beer should focus; ‘is this beer the best it can be in representing the technical skill of the brewer, or is it a by-the-numbers beer?‘

There is a reason there are two titles to distinguish those in charge of a brewhouse; ‘head-brewer’ & ‘brewmaster’. For more on this, I would suggest reading Mitch Steele’s own blog post & opinion on this called ‘Brewmaster defined?‘ And this beer, is a clear testiment to Martin Dickie’s credit as a brewmaster, with this being his creation. We do have some ‘brewmasters-in-the-making’ in Ireland who in a few years will be the absolute rock-stars of Brewing in Europe. And I genuinely believe that.

Ireland when it comes to ‘zero-fucks-given’ in thirty-something attitudes is awash with these kind of creatives in brewhouses across the country. And it is exciting to see some of these people ‘do their thing’. The ones who obsess over things like water PH, hop acids & even how dry hopping can be improved right the way to some of them right now cultivating their own house-strains of yeast to move away from the US05 apostles.

There are some incredible pale ales produced in Ireland right now that come very close to competing with Dead Pony Club in my opinion;

These for me are the standard bearers for Pale Ale produced in Ireland. And while there are some session IPA’s in or around the same ABV, they are session IPA’s & frankly they can’t be judged against Pale Ales. I would happily wager that these beers in a few years time will age well in their recipes, which will be tweaked no doubt along the way to make them even better. And no greater example of this is there than Cousin Rosie’s Pale Ale, which went from being ‘alright’ to being something which is a full on member of the League of Shadows that even Ra’s Al Ghul would be proud of.