Double IPA’s are probably my favorite beer style. The first one I ever had was Stone Brewing’s Ruination. It’s a beer that despite it’s change has remained a firm love of mine. One of my biggest gripes in our market for a number of years has been the lack of Double IPA’s I can put hands to & the ones that did exist were in the most part to me, very uninteresting. But that was then, this is now & we have a choice of Double IPA’s that makes this hopped up sonuvabitch … well, a happy sonuvabitch. I recently say down to crack into four of the latest ones to hit our market & give them a try.

Before I get started here, I’ve something I need to get out-of-the-way. In the past, I’ve said alot of stuff. I’ve said alot of dumb stuff. I’ve also said a shit-ton of really stupid stuff & I’ve uttered some utter-nonsensical uber-bollocks. One of the aforementioned has been “It’s not a DIPA to me unless it’s 8.5% ABV or higher. IDGAF – this is the bar for DIPA as far as I’m concerned.” Right, so let’s accept I talk bollocks alot. And put this particular piece of past-tense rambling down to me spouting bollocks so we can move on to the reviews shall we? We can? Great, then let’s get into these fabulous beers!

As a soundtrack to this quad of reviews, I thought this piece of music was absolutely apt to show the diversity at play (plus it’s an old school favorite of mine): 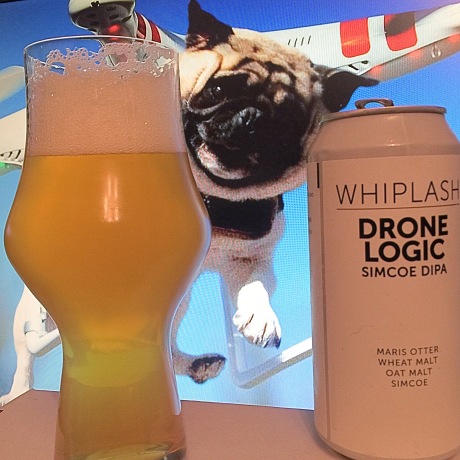 If tomorrow I was told all hops were going to die & I had to save just one variety only, Simcoe would be it. It is a hop I truly love & adore for just how much it can bring to a beer, especially this years crop. This DIPA is all about that fresh-crop Simcoe action, which instead of the usual-suspect piney, resiney action, is about a huge massive CBT of outrageous amounts of pineapple, which in tandom with the oat & wheat malt gives is a tremendous amount of punch alongside my favorite malt of all-time, Maris Otter.

Being privy to the exactly how this beer was put together (thanks Alex) I consider an utter privilege, & this to me may just be my idea of my absolutely perfect DIPA; using my favorite beer ingredients. There’s so much depth in the beer because of just how this year’s Simcoe crop has turned out. And it just truly shows that the magic in so many beers we love really comes from the growers & their produce as much as the genius of the brewer.

And I think that’s something so many craft beer bloggers & writers forget; the unsung heroes of those who grow the ingredients for our beers & harvest them. And then those who do the malting & the preparation of the hops; whether it’s whole dry or pelletised. If any of the ingredient stages has an off-moment, the brewer’s intent becomes even harder to deliver on. And therein lies the great difference between micro & macro produced beer. One has industrialised chemistry to help ensure consistency, the other actually has to use an art to ensure the beer is delivered. 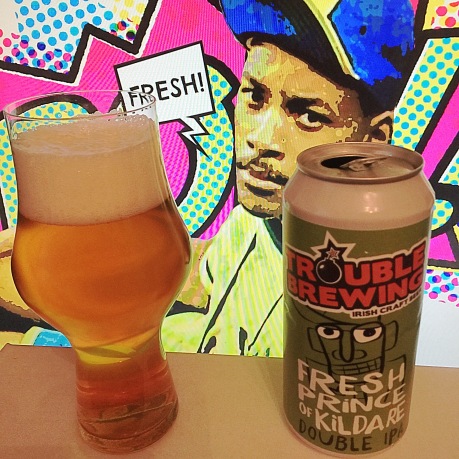 I missed out on the first iteration of this beer which was a hazefest. I can’t say I’m sorry I did, as many of the NEIPA’s I’ve tried have just not been ot my taste at all. It’s a ‘style’ I just do not enjoy at all. However, this version of the beer now in cans is a big balls-to-the-wall monster that is completely in the style I love.

It pours like silk into a glass, & the sheer amount of hops in this beast can be smelled the second the can is cracked open. It’s anything but subtle. This is like Pennywise the Clown appearing in a gutter under your feet. And just how hardcore it is with its hop aromas is something I not only respect, but love. As it pours, it’s lively as fuck & it gives you this massive three finger head that is a joy to behold.

The first taste is a big smack in the chops to remind you this isn’t going to be Carlton dancing. This is gonna be Uncle Phil laying the damn law down.  I love it when brewers aren’t afraid of beers being truly giant in their flavours. DIPA’s aren’t meant to be subtle. They aren’t meant to be ‘nice to you’. They are meant to give you a crushing energetic handshake that lets you know ‘Hey, nice to meet you, fucker!’ with a big mischievous grin on their face.

If there’s one character from a movie I equate to DIPA’s, it’s Stifler from the American Pie series. This is the kind of character I seek in DIPA’s; outrageous, cheeky, a-loveable-dick-with-flaws, & one that is unapologetic in who/what they are for better or worse.

Fourpure’s Juicebox is a beer I enjoy very much. Then those crazy bastards from London. It’s a spanish-orange nuclear fall-out DIPA that they describe as ‘blasting California Dreaming through very large speakers at such a high intensity, the fruit just falls from the trees and juices itself‘. I’d describe it as blasting through the twisty mountain roads of the mountain pass of the San Carlos Reservation in Arizona in a drop-top V8 Camero blasting out Metallica’s ‘Don’t Tread On Me‘ (and I know exactly how that feels having done it) with the world’s biggest grin on your face while you’re slightly terrified by the sheer power & the hundred foot drops at the sides of the road.

One of the biggest issues I’ve had with fruit inspired beers (especially NEIPA’s) is their sweetness levels. It’s like cheap tacky supermarket marmalade; there’s only so much you can take. But this beer completely eschews that. It’s full-on hardcore Seville-orange, thick AF cut marmalade on the nose, & it has a bitterness to boot.

‘Deucebox’ is not just Juicebox on steroids. It’s not just a mindless Hulk-up version of the Juicebox Bruce Banner. Think ‘Planet Hulk’ version of the Hulk. It has purpose, it’s thoughtful, serious when it needs to be & when its fury is unleashed, you better hope to hell you weren’t on the bad-side. The punchiest of the bitter orange here is nothing short of glorious.

Every second of this beer is enjoyable. From the opening of the can, right the way to that intense bitter orange finish that has you wanting more like a crack fiend. THIS is what DIPA’s are about; good old-fashioned, risk-it-for-a-biscuit, theatrical, pee-your-pants-in-excitement fun.

Some DIPA’s just wanna grab you by the head & shake you will your head becomes detached. Then there are those that have the sole mission of kicking the living shit out of your senses, leaving you dazed & confused. ‘Hobo Chic’ seems set on being a real middle-of-the-road DIPA. Do not for one second mistake that assessment for being ‘meh’. This is an anything-but-meh beer. The citra dry-hop on this ensures that this is a hardcore stone-fruit aroma, which amongst this set of DIPA’s makes it stand out a country mile.

The pour isn’t as hyperactive as the others with less carbonation, & a head that doesn’t particularly care to hang about. The beer certainly doesn’t suffer for it & feels a hell of alot lighter than its ABV suggests. Like so many of these DIPA’s, you could easily mistake it for a hop-monster IPA & suddenly find yourself two bottles deep in it without realising like I did.

Sure, I didn’t score this as high as the others on this list, but it’s only because against these beers, it’s not on par with them. And that’s more a reflection of the ultra high standard of them. This is a beyond-serviceable beer. This is a proper foot on the floor DIPA that is enjoyable, easy to drink, full of fun & one I hope I see more of again in Ireland.

All of these beers are available at most good independent craft beer shops in Ireland.